Ingredients include ice cream, whipped cream, fruit and liqueurs. It all sounds pretty parfait to us!

Sadly we don’t have any parfait for you to enjoy, so you will have to partake of some DOTI Dev delights instead…

An updated video of the vehicle braking audio we showed you last time. This time, in addition to the tyre squeal, we have our emergency vehicle sirens working. Oh, yeah hit those blues ‘n’ twos!

A few more images of the environment within the vertical slice test map. Oh yeah, the Bonnie and the blood thing, seems the photographer ‘turned nasty’ and inappropriately tried to nibble her neck…she was having none of it! 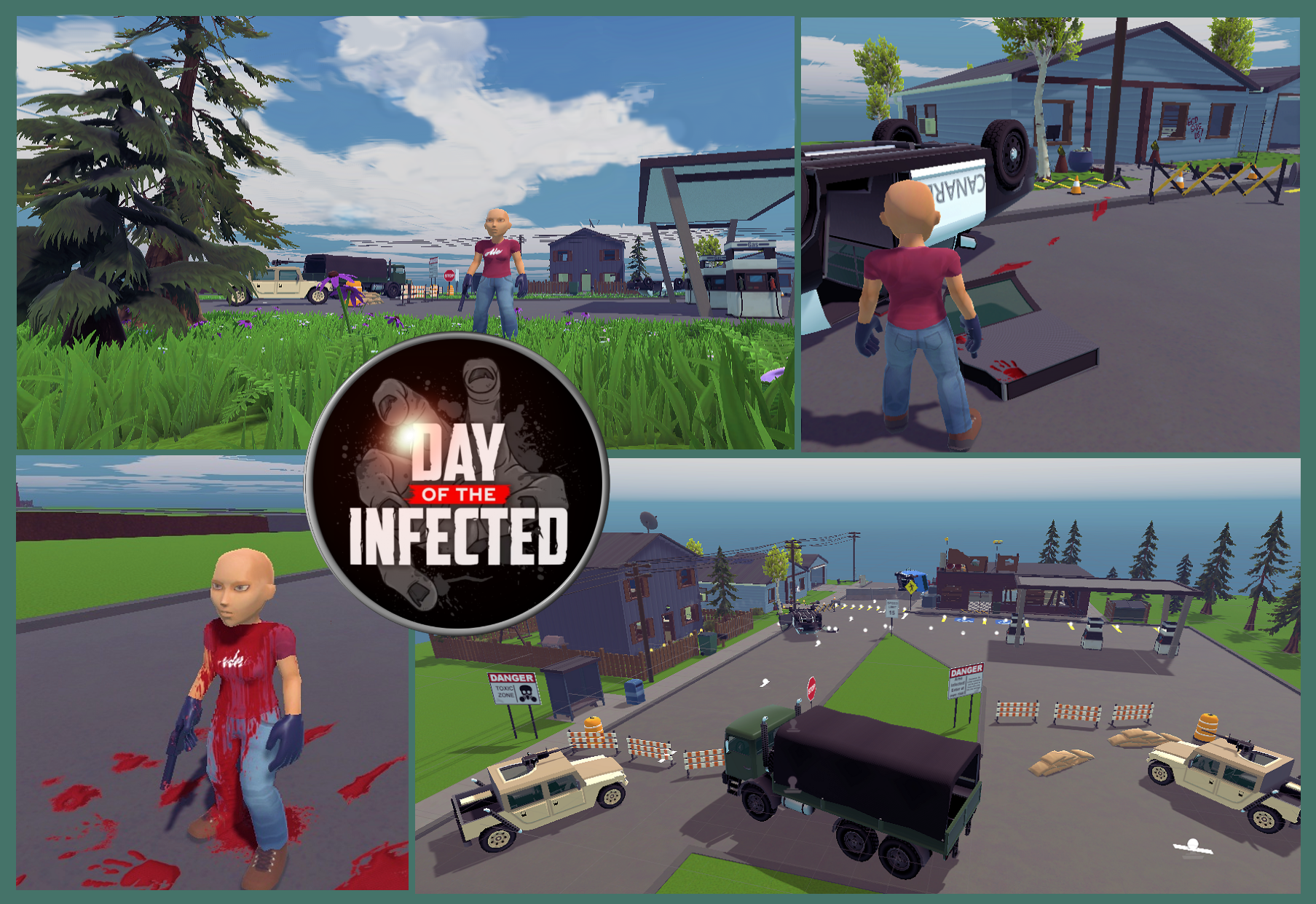 Bonnie has also been inspecting the local farms, checking out this year’s corn crop…that is, we assume it’s corn. The world may have become a place of mayhem and despair, but at least we have ‘corn’… 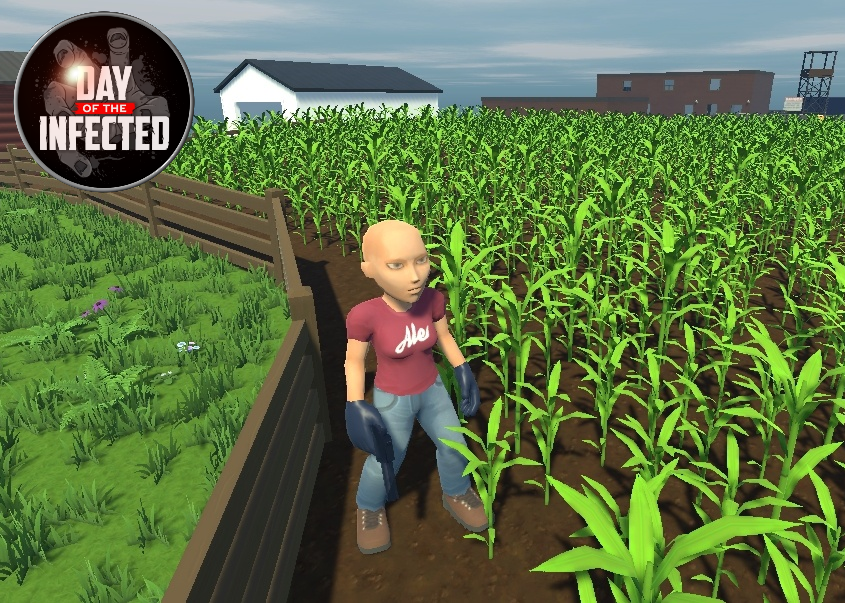 Someone’s been messing with the weather…oh yeah that’ll be us. The example below demonstrates the variance in the look and feel of the environment between a bright sunny sky, and an overcast, dull one.

Still a work in progress, but we even have the wind in the willows. Well actually it’s a birch, but we probably have a willow somewhere that needs a good airing. We don’t have a resident Holy Fire arborist, so it’s anybody’s guess.

The Canard road network has seen some major resurfacing and widening recently. Road width has been tweaked to better suit our vehicles and road surfaces have been given a more ‘lived in’ look with the addition of cracks and variations in surface shading.

The urban roads are now constructed using a modular set of road pieces that allow for rapid yet accurate placement of roads in and around urban areas and connecting highways. This will help speed up the construction of DOTI’s roads.

During the making of the above video, the police turned up and asked Clyde, our test driver, to ‘walk the line’. It turns out, Clyde is just a useless driver and a creative sense of direction. 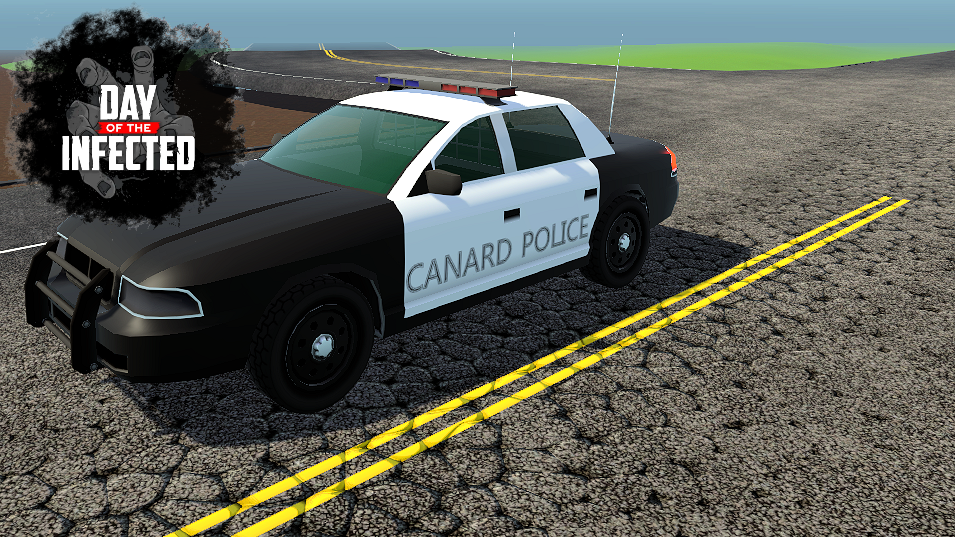 More props, you can never have enough props! This time we are catering for the more theatrical and media production minded survivor. From Tuber to Twitcher, green room to green screen, we have it covered! Last week we teased a white box version of a new vehicle, this week we reveal the Ovkorski Firehawk attack helicopter. Sleek but definitely not meek, this baby packs a rocket screaming, cannon strafing punch! Several of these have been seen recently patrolling and enforcing the in the skies over Canard. 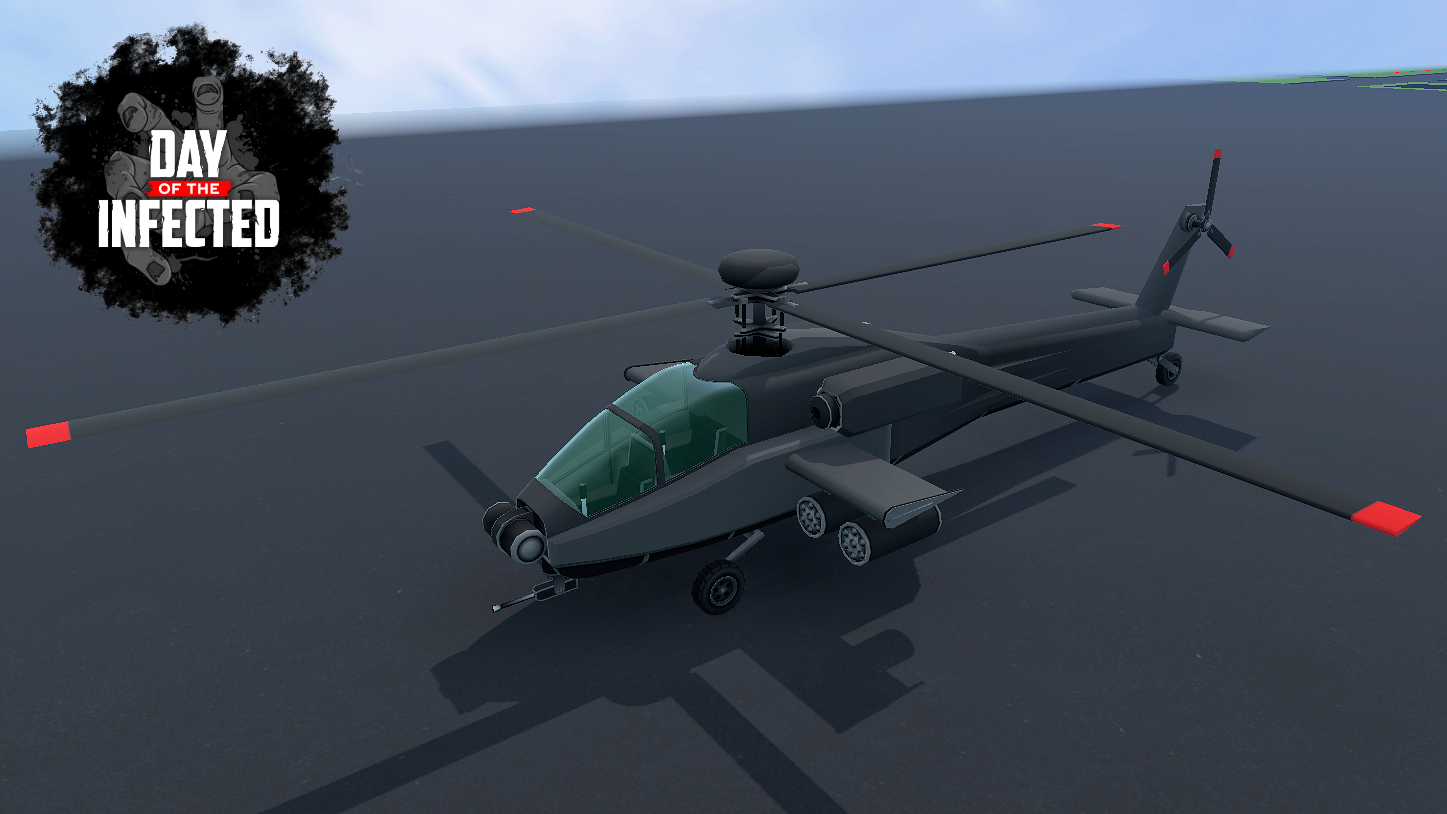 This black beast is fully capable of swooping down and putting a serious dent in anybody’s life expectancy. If you see it, it is probably already too late! If you missed Part one…click here

Hirschel’s hand trembled as he turned the brass key, unlocking the bedroom door. A silver-haired woman stood by the window, silhouetted in the bright morning sun. Her long hair flowed loosely down over her shoulders and spread across her white cotton nightdress. She rocked gently back and forth and as Hirschel approached he could hear her quietly moaning to herself. He reached out and placed a hand on her shoulder, the woman turned and snarled viciously into his face. Her foul breath stifled him as he held the gnashing creature at bay. Smiling, he looked into her eyes and pulled her close into his arms, Mrs Jackson screamed, and her teeth tore into his exposed flesh…

Hirschel woke with a start. He cursed himself for falling asleep on the job and in such an exposed spot, he really was getting too old for this. Massaging the sleep from his body, he looked towards the now darkened building silhouetted against the moonlit sky and glanced at his watch, 0300…perfect.

Undercover of darkness, Hirschel ran stooped, moving through the shadows towards the rear of the store. He listened at the side door, hearing nothing he carefully tried the handle, locked. He moved back around to the rear where he had observed a storm door the previous day. He pulled on the handle, a loud creaking filled the air as the large heavy door began to rise. Hirschel couldn’t believe his luck until a rusty chain that had been wrapped through the handles stopped its progress. Hirschel lowered the door and reached into his backpack to retrieve a set of bolt cutters. Wrapping a cloth around the chain to deaden the sound, he pushed hard on the cutters until he felt the chain break.

Hirschel checked the safety on his Colt and silently lowered himself down into the inky blackness of the cellar below. Completely blind he stumbled, he reached into his jacket pocket and took out a small torch. Using a torch was risky, but without it, he couldn’t even make out his own hand. Slowly, he scanned the room with the light, keeping its red beam low illuminating the room in an eerie glow. The cellar seemed empty apart from a large wooden table standing in the centre. On closer inspection, it proved to be a butcher’s block, a large cleaver had been left embedded in the edge of its thick maple top.

A low whimpering sound caught Hirschel’s attention, it seemed to be coming from a darkened corner. Fearing a dog, Hirschel turned quickly concentrating his torchlight and Colt towards the sound. A large wire dogs cage stood against the far wall, inside was the hunched figure of a young man in his late teens. The torchlight illuminated the boy who desperately pushed back into the corner, cowering in an attempt to remain hidden.

“It’s OK, I won’t hurt you. Who are you, son?” Hirschel whispered reassuringly. The boy turned and looked into the light…

“Don’t hurt me again, please just kill me…please!” The boy begged loudly, cradling his bandaged hand protectively. “I don’t want…not like that…don’t do that to me, not like Micheal…”

“Shhh, keep it down, boy. I won’t hurt you, I promise,” Hirschel reassured him, worried he may wake the sleeping occupants in the rooms above. The boy moved towards him as he reached to open the cage. It was then Hirschel saw the boys hand, or rather the stump where it had once been. “What happened to your hand, son?” he asked, pointing at the dirty, blood-stained bandages wrapped around the youth’s wrist.

The boy pointed towards where Hirschel had seen the meat cleaver. Hirschel’s stomach turned as he realised the answer to the question that had been bugging him. ‘Where did the butcher get his meat?’  From the state of the boy’s hand, he suspected just how “Bliss & Lovett” kept their meat fresh.

He helped the boy to his feet and lead him back towards the hatchway. He would deal with these creeps later, infected were one thing but this? This was inhuman…barbaric! They reached the ladder and began to climb up… A bright blinding light filled the basement, and the door above slammed down shut showering them in the dust. They were trapped.

“Well, well what do we have here, fresh meat delivered to our door?!” Mocking laughter filled the air…

Other stuff we’re working on

Right people, that’s your lot for this edition, we hope you have enjoyed your glimpse inside ‘The Day of the Infected’. Be sure to drop by next time for another instalment of DOTI goodness and the ghastly apocalyptic world of Holy Fire Games…