Development Update – Take a Ride to Hell ‘n’ Back

Over the past few months, we here at Holy Fire games have been working to produce a much higher quality experience in comparison to earlier builds of the game. This, together with many of our team working on the background tech, has affected the amount of new and juicy content we have to show off each week.

With this in mind, we have reluctantly made the decision to move the Devlog from its current weekly slot back to a bi-weekly schedule. This move will help us keep the Devlog fresh and less repetitive during the core development period. Don’t worry, though, you won’t miss out on anything, we will still be sharing our work with you. We love giving you a peek into our world and always will.

Welcome back survivor, come on in and peruse the colourfully creative world of game development. Talking of colourful creativity, today we take a moment to pay tribute to that wonderful 1930’s invention, wheat-based wallpaper cleaner. Um, that doesn’t sound right…ah yes, sorry ‘Play-Doh’.  That’s right, today is ‘Play-Doh’ day, a day to celebrate a very useful substance in our apocalyptic world. Not only can you use it to clean the gore stained walls of your chosen hideout, but it is edible too! (warning contains evil wheat) My old ma used to tell me not to play with my food…what do mothers know, eh?

So, grab your ‘Fuzzy Pumpers’ and join me as we take a journey into the wonderful world of the ‘Holy Fire’ fun factory.

For this weeks foray into the melodic world of the apocalypse, we have a short piece that delivers a certain creepy ambience to the desolation of the quarantine zone.

The Bus That Roared?

We all know and recognise the ubiquitous big yellow American school bus. Canard’s own Miasma Motors has been building their unique version of this iconic vehicle for decades. The bus is suitably utilitarian in its robustness and has delivered many a tearful child to the hallowed doors of enlightenment.

During the fall of Canard, many of these vehicles were ‘acquired’ by survivors. The yellow icon turned out to be eminently suited for use as both transport and shelter. They became highly sought after, and often change hands, usually with blood-stained ‘pink slips’ being prised from the cold dead hands of the previous owner. 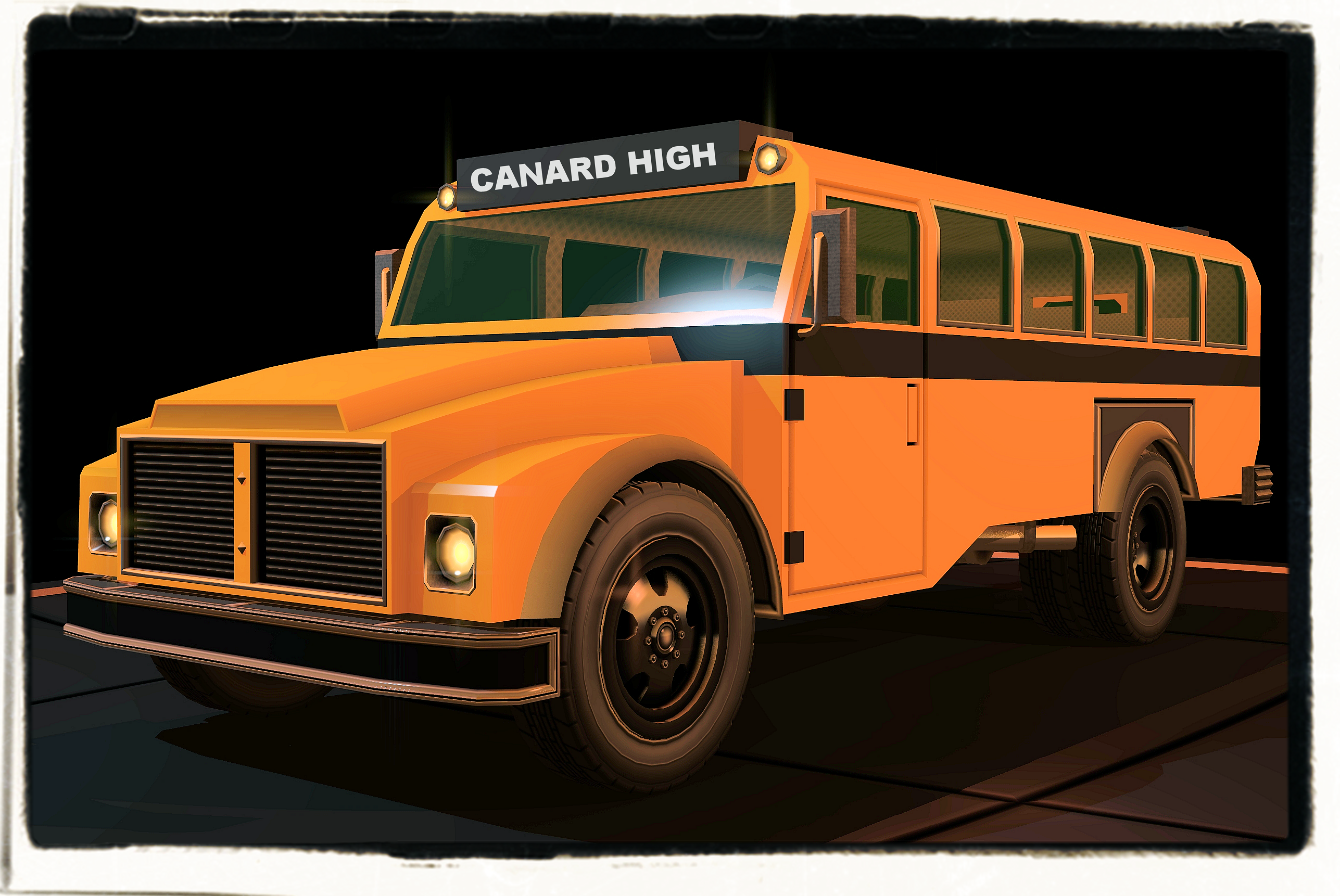 Some of the buses have been extensively ‘upgraded’ to better suit their role in the new apocalyptic world. An enterprising group of outlaw Scavs took one of these beasts and turned it into a monster, aptly named the ‘Black Mamba’.

With the addition of heavy-duty steel plating, flesh slicing razor wire and some very nasty pointy spikes, the Mamba is the ideal ride for that resupply trip down to the mall or even popping by to visit with the neighbours. This dark horse ploughs through hordes and enemies like a hot knife through butter, crushing, maiming and mutilating all those in its path.

Other groups have since followed suit and several of these battle buses can now be seen roaming the countryside. They are now so highly prized that they are regularly the focus of bloody conflict between rival Scav gangs who roam the desolated Canard. 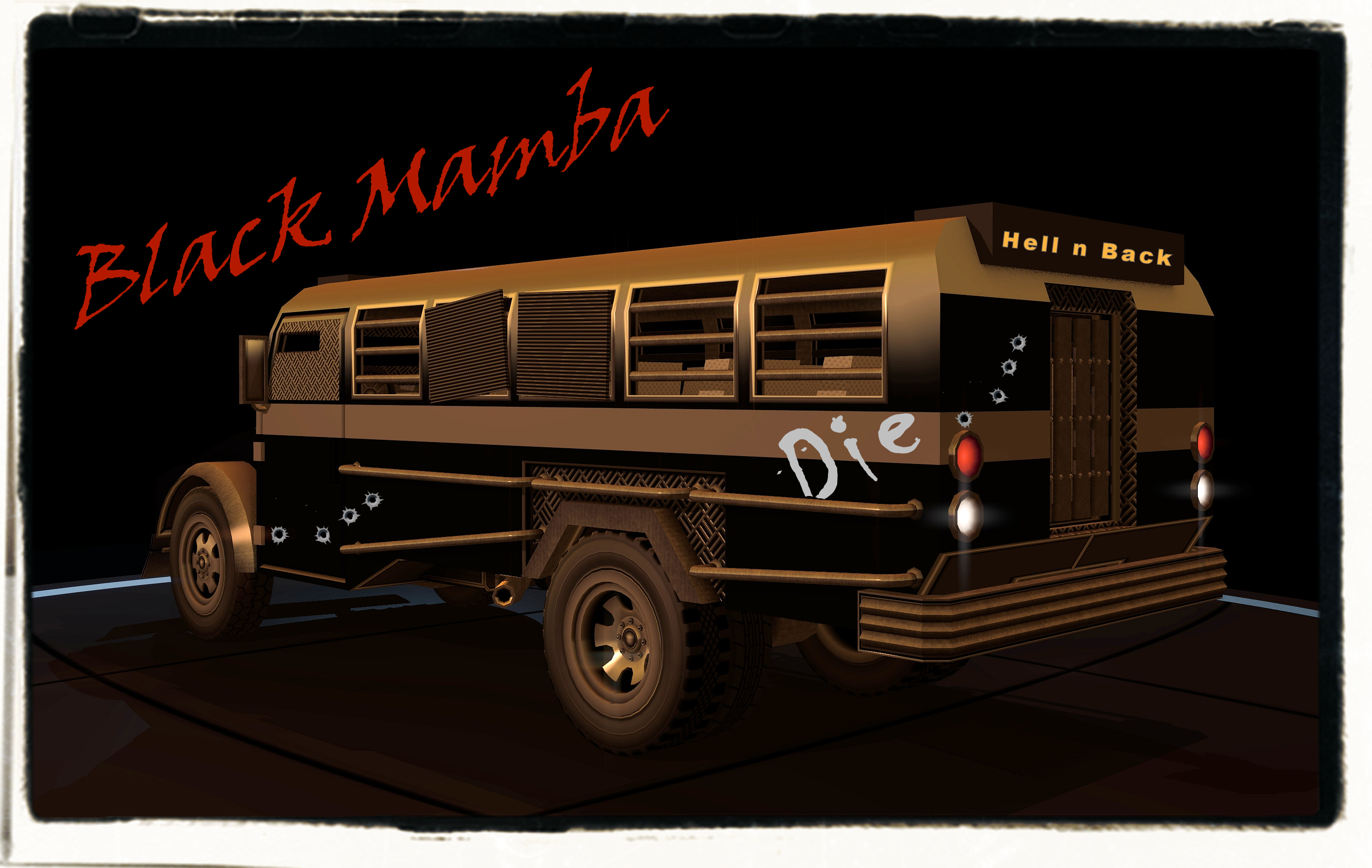 Alice Newton stepped out from the wreckage of the convenience store into the fading light of sunset. She was a little disappointed, she had hoped to find more. Food was running low, and Alice worried for Jimmy, he was starting to look painfully thin. Clutching her haul of one tin of beans and a bag of stale bread in one hand, she reached down to take her son’s hand in the other and led him down the street towards home.

It was getting dark, she berated herself for not keeping an eye on the sun. She had been too focused on the search for supplies, and now they were at risk. The zone was a dangerous place, especially after dark, when you couldn’t see what was coming for you. She picked up the pace and urged Jimmy to keep up, she had a bad feeling…

When the school came into view, Alice began to relax a little, home and safety were now only half a block away. Jimmy was exhausted, but she didn’t slow, eager to get back into the safety of the loft above their apartment where they had hidden since the riots.

As they approached the school, she noticed three figures emerge from a side alley, they seemed to be disorientated and walked with a strange gait.

“Rotters!” she cursed breaking into a run, pulling Jimmy along behind her.

One of the creatures spotted them and screamed a deafening, pained scream, his two companions responded, and all three sprinted towards Alice and her son. 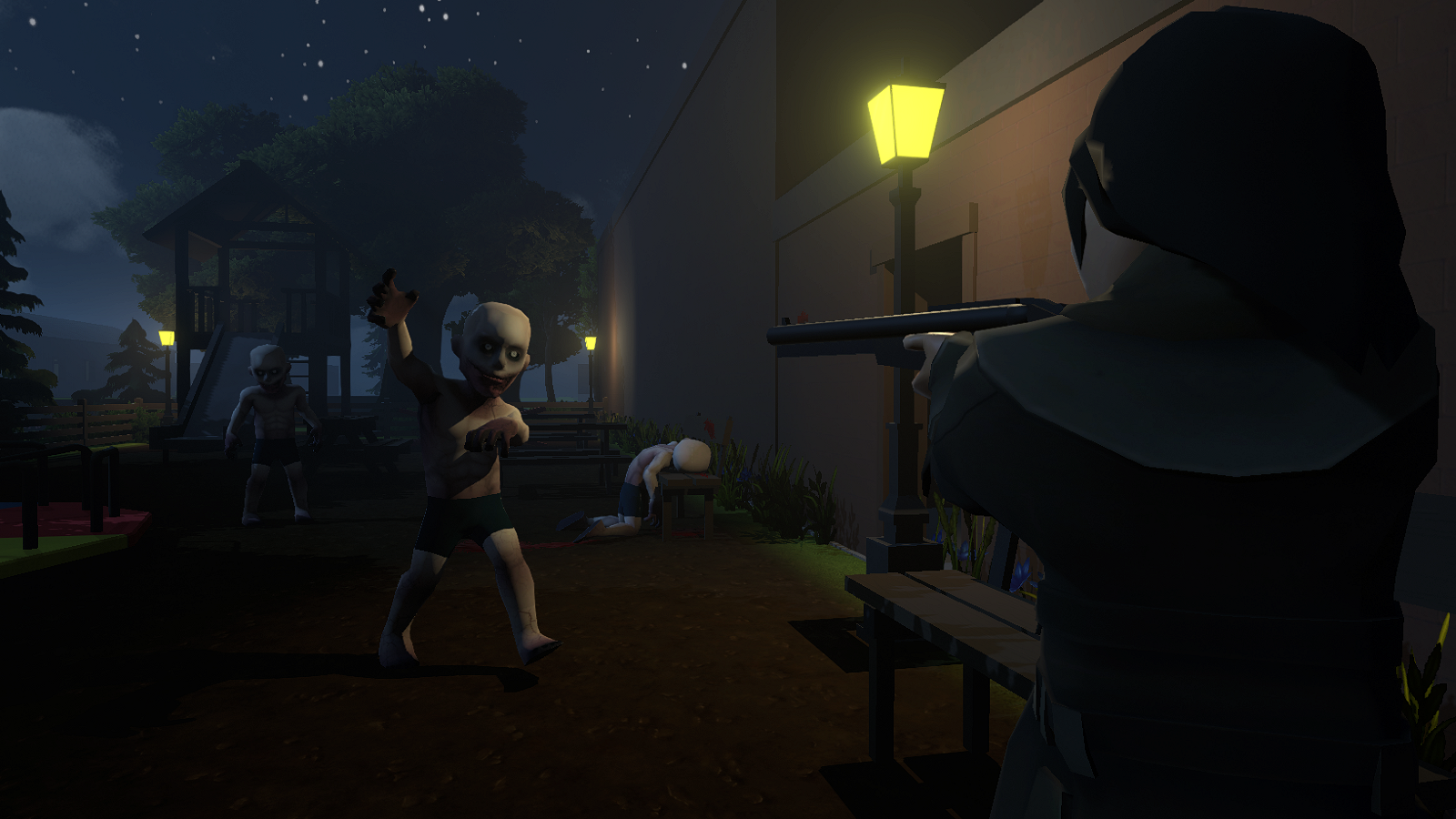 They made it as far as the playground before Jimmy, unable to keep up, stumbled, crying out as he fell. Turning back to help him, Alice realised there was no time, the infected were almost upon them. Sliding the shotgun from her shoulder, she aimed it in the direction of the closest pursuer and squeezed the trigger. The gun fired, her ears ringing, she watched the creature stumble and fall, it’s head crashing against a nearby bench. Without pause, Alice emptied the second barrel and a second attacker staggered backwards before sinking to the ground, hands outstretched still reaching for the boy.

“Jimmy, run!” she screamed, Jimmy ran as fast as he could, keeping close to his mother.

As they ran, Alice desperately fumbled with the shotgun trying to load her last two remaining cartridges. The first round slid easily into the barrel but, in her panic, the second slipped from her fingers. Cursing as it rolled away, she sensed the last attacker was close. Realising she only had one chance, she stopped, raised the half-loaded gun and waited.

Her heart pounded as the slavering monster closed on them, it’s yellow eyes fixed on the boy. With only feet between them, she prayed and squeezed the trigger. The sound of the shot echoed down the street, and the screaming attacker fell silent at Alice’s feet.

She looked down into the diseased and disfigured face of the dead woman and cried out. Tears welled in her eyes as she looked into the face of Penny Cartwright, Jimmy’s favourite teacher.

“I’m sorry,” she whispered, tears rolling down her cheek. “I had to…”

Cradling her sobbing son in her arms, they headed for home.

Sadly, it is time for us to leave you once more, but we look forward to seeing you again for the next instalment of the ‘Infected Files’. In the meantime, why not get out that vividly colourful modelling clay and treat yourself to some good clean wheat-based fun!