Before we delve into the dog eat dog world of game development, let us take a moment to paws in contemplation of that someone special in our lives. That little someone who poops on the lawn, chews our slippers and pees on the rug, bless em.

That’s right! Today is National Dog Day. A day to celebrate wet noses, smelly coats and muddy carpets. They say that dogs lead a ‘ruff’ life, let’s see shall we…we feed them on demand, walk them on demand and even lower ourselves to pick up their ‘warm moist gifts’ on cue, nope they have us right where they want us!

Right, before I have to give old arthritic Rover his bath, there’s just enough time to show you what deliciously chewy kibbles and marrow filled goodness we have for you loyal mutts this week. Let us get the lead and take a little walk…

All things white and wonderful

The demi-gods of world-building, here at Holy Fire Games, are working their unique magic to create a fresh new playground in which to test all of our new toys and gameplay goodness.

This initial area covers an urban environment providing us with a good selection of location types, each offering varying gameplay possibilities and challenges to the players’ survival.

The image below shows the initial ‘white box’ phase of the map, which is currently at an early work in progress stage. It will soon be brought to life with the addition of textures, lighting and props to create a realistic, handcrafted area to explore and fight over while providing us insight into gameplay and bugs. 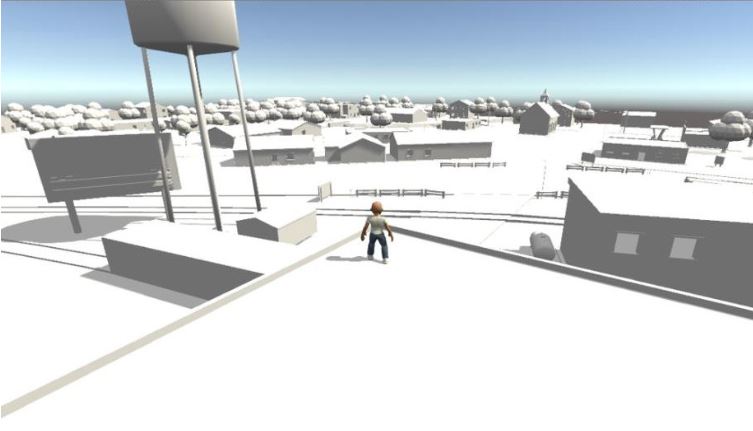 The remodelling of our extensive armoury is almost complete, here is another small selection of our updated weapon models for you to drool over. We think they look pretty cool even without their textures. They are also a much better fit for Bonnie and Clyde, our new character models. 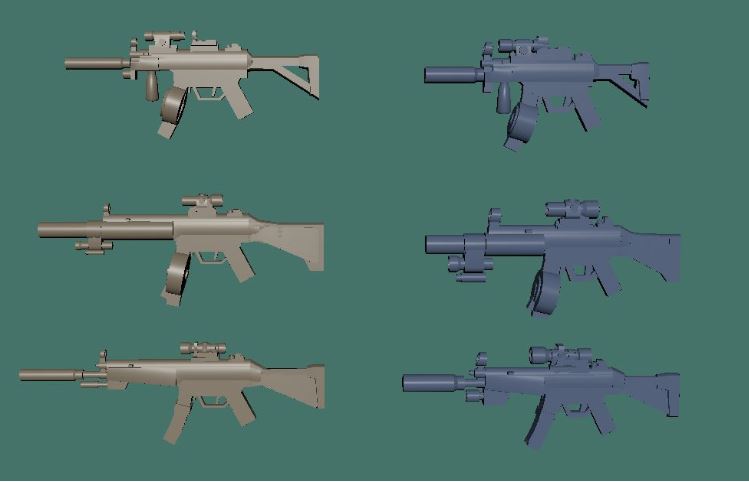 We are working on methods to provide players with visual and audio feedback as part of our stealth system. These will provide information on potential threats and whether that hungry-looking infected horde is taking an interest in your squishy bits.

The video below shows early tests of a visual cue effect that alters the player’s view of the world depending on stealth conditions.

Following on from our previous delves into the progress of character animation, we have a couple more animated manoeuvers for your viewing pleasure. This week we concentrate on those moments when you realise you are going the wrong way.

Oh noes! I left the gas on!

Talking from experience, I can report that the thing with Hazmat suits is that they are a little restricting when it comes to those everyday activities. Also, nature never seems to give enough warning. The suits are challenging to get out of quickly, and the restroom is always so far away!

Whoops too late, ”wipe and rinse Clyde, wipe, wipe ‘n’ rinse”.
Thankfully these suits are roomy inside with plenty of ‘storage’…by design?

With the anticipated completion of the animation rework, all of our old character animations have been removed. The new, improved animations are being added as we speak, so you can look forward to testing out the all-new character model and bunny hopping your way out of that tense firefight, like the pro gamer you are!

Their coming to get ya!

Our infected, ‘zombie’ AI is currently being fleshed out. This will include NPC navigation, pathing and movement transitions. Infected will respond to sound, movement, seek food and move towards potential victims or threats.

They may seem peaceful, but get too close or make too much noise, and you will quickly find your liver on the menu at a speed Usain Bolt would be proud of!

The SFX crew have been hard at work creating sweet engine sound effects for two more of our vehicle line up. This time it is the turn of the Aeriform Industries Vireo light aircraft, the Miasma Motors VR8 Dispatch panel van and its sister variant the FR8 Transmed ambulance.

Many terrible events took place during the fall of Canard City and the surrounding countryside. Its residents, driven to insanity by the unseen virulent infection. They became irrational, violently psychotic and finally developed a craving for living flesh. Many senseless acts of violence were witnessed, as friend turned on friend, neighbour attacked neighbour and even turned those they loved.

Albert J. Stubbs took a long draw on his cigarette and looked down at the corpse of the recently deceased editor of the Canard Gazette.

Albert had been on the paper for almost forty years, man and boy. He had seen it all, done it all and reported it all, always with his trusted wire bound notepad and a number 2 pencil. The youngsters mocked him for not keeping up with the times; they all had shiny tablets and soulless smartphones… a pencil was too old-fashioned and too simple.

Looking into the vacant eyes of his victim, he sighed, exhaling a cloud of grey smoke which drifted over the pale, dead face. Twenty years his junior, the dead man had been the worst of them all. He had a lust for change for the sake of change, a worship of the shiny black screen and animosity for the humble, yet trusted graphite. They had all poked fun at ‘old’ Albert, but he would have the last word. He was a reporter; it was his job; it was in his blood!

He dropped the cigarette stub onto the tiled floor and stepped on it, extinguishing its glow beneath the rubber sole of a black patent leather shoe. Flipping open his notepad, he reached down to retrieve the yellow pencil that was protruding from his former editor’s chest. He thought for a moment. He smiled as he selected his words and then began to write. He tore the bloodied note from the pad and, bending over his victim, while he pushed the pencil through the paper and back into the corpse, skewering the note to the man’s chest.

“The pen is mightier than the sword! The pencil is a worthy runner-up.”

Albert Stubbs reached to his breast pocket and selected a new freshly sharpened pencil, and tucking it behind his ear, he stepped over the bodies, and for the last time, walked out of the newsroom into the sunlit street beyond.

The DOTI player camera is still receiving tweaks intended to give the player an intuitive, unhindered and smooth visual experience while running around Canard county.

The folks responsible for our web presence are still plugging away on the revamp of our official website. The eagle-eyed amongst you may have noticed the redesign of the DOTI HQ site a while back and the current work will be bringing the official site into line with this.

Sadly, it is that time again. Rover is curled up, asleep in his basket, dreaming of nipping at the heels of our recently infected postman and we have come to the end of this week’s short walk around the DOTI park. We hope you have enjoyed sniffing out the comings and goings here at Holy Fire central.

Until next week, stay safe and remain infection-free!